The Anglo-Irish writer Jonathan Swift was born in Dublin, Ireland on November 20, 1667. His father died when he was still a very young child, so he spent the first five years of his life in England, with a nanny who was given charge of him.
In 1682 he entered university in Dublin, from which he graduated a few years later. Subsequently, he went to England and accepted a position as Sir William Temple's secretary. Sir Temple was an important retired statesman. Swift proved himself in his service and gained his trust. After some years of successful work in the service of Sir William Temple, Swift returned to university, this time to Oxford. An increasing discord with Sir William lead to Swift's return to Ireland. He decided to get ordained as an Anglican minister and in 1694 was sent to Kilrott, which he left only a short time later due to the bad working conditions. Subsequently he returned to work for Sir William in 1695. During this time, Swift completed his works "A Tale of a Tub" and "The Battle of the Books". Swift met Ester Johnson, the illegitimate daughter of Sir Temple's.
Ester Johnson and Swift shared a deep mutual affection. When his master died in 1698, Swift returned to England and accepted a position in the church. During this time, Ester Johnson moved to Trim, so they lived nearby. With his previous books and "Dissensions in Athens and Rome", which was published anonymously in 1701, Jonathan Swift became successful and won the corresponding respect as a writer. Around 1710 Swift became politically active for a short time and wrote sharp-tongued political satire. That year and the following year, he was the editor of the Tory weekly "Examiner".
Alongside his marriage to Esther Johnson, Swift entertained an eleven-year secret relationship with a young lady called Miss Vanhomrigh, who did not know that Swift was married. She died in 1723 shortly after his revelation. In 1726 his notoriously famous novel "The travels into several remote nations of the world by Lemuel Gulliver" were published. Swift's wife died in 1728. His health deteriorated considerably. Jonathan Swift died in Dublin on October 19, 1745. 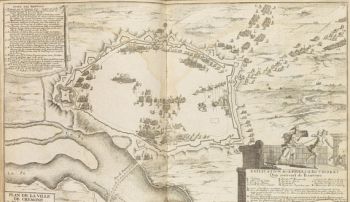 Would you like to sell a work by Jonathan Swift?